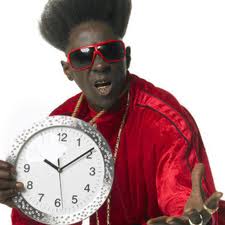 I am a big watch guy-I love watches!  Last weekend I bought a new watch that was a little bigger and shinier than I usually buy.  Let's put it this way, my kids starting calling me Flava Flav.  Anyway, I wore my new watch to school this week and the students were very complimentary.  Yesterday during my morning rounds a student asked my how much my watch was worth.  I told him the watch was only $40, and that surprised him.  As we walked down the hall I further explained to him that it's not the value of the watch, but the value of the person wearing the watch that really mattered.  I followed up with a quote that amused him- I said "it's a ten dollar watch on a million dollar man." He tried to play it off that the quote was "crazy," but used varied versions with each teacher we passed as we approached his classroom.

Later that day I stopped by his classroom to say hi.  As I entered the room he immediately jumped up and shared my exact watch quote with his teacher and classmates.  What a teachable moment!  With the teacher's permission I sat with the small class of 4 boys and began a discussion on character.  We shared stories and laughed together as they each tried on the over sized watch.  The conversation with the students only lasted ten minutes, but the trust we began to build may last ten years.

My core educational belief is that we can reach ANY child.  It all starts with building relationships.  It is hard work and takes time.  The most important "R" in education is not reading, writing, or arithmetic.....it's RELATIONSHIPS-build one today!