Up until 1975, the schools were as segregated as the neighborhoods:
Charlestown is located on a peninsula north of downtown Boston. Throughout the 1960s until the middle 1990s, Charlestown was infamous for its Irish Mob presence. Today the neighborhood is a mix of upper-middle and middle-class residences, housing projects, and a large working class Irish-American demographic and culture that is still predominant.
Charlestown High Scho 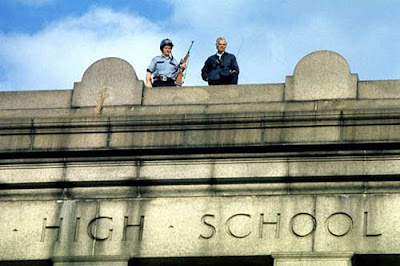 ol is the only high school in Charlestown. It received national attention in the 1975-76 school year when forced busing brought African-Americans into the then all-white school. Louise Day Hicks, who was the head of the school board at the time, firmly believed she was not a racist but was protecting her birthplace and the culture of a community school. The school year was plagued with marches, violence and racial epitaphs towards the African-American students brave enough to board the buses every day.
During this time Boston Public Schools was 60% white. Today 82% of the city's public school students are of color. Today Charlestown High School has nearly 1000 students with 51% African-American, 23% Hispanic, 18% Asian and 8% white.
This was all on my mind as I took a taxi from the train station in downtown Boston over the bridge into Charlestown.
With a newer building, the school has been broken down into five learning communities each serving a different population including Chinese and Spanish bilingual communities. 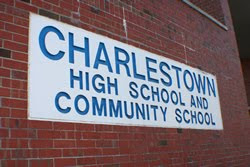 On the third floor one door opens into a pod of classrooms. An open space is central to three classrooms and two offices. The community I visited was created to serve those students who did not have a successful 9th grade. According to the director there are 7600 students off-track in Boston but only 1200 seats in alternative programs. This program serves 75 students.
The community, in its second year, enjoys the autonomy of the selection of students, student schedule and teacher hiring. It also collaborates with the larger school to provide sports and AP courses to students.
However there are still challenges being the small fish in a large comprehensive high school. There are three rules that dominate Charlestown:
These rules don't mix with the restorative justice theme that this small school is weaving into the fabric of their community. The staff of three full- time teachers and shared science teachers are close-knit. They have been able to create a comfortable family atmosphere for students who haven't had positive interactions at school. The school meets together as one every two weeks to celebrate and tackle community issues.
During my visit the whole school is together for a debriefing after the prior day's visit to the race exhibit at the Museum of Science. Students have their hats on and phones are out but there is a spirited dialogue involving all students on race and its impacts. 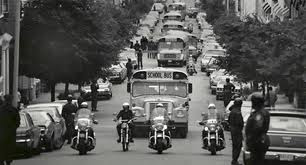 As I scan the room during this conversation I see a diverse group of students; however they are all of minority populations. I wonder what this conversation would have sounded like in 1975. I wonder if this is what the students who were subjected to police escorts and ridicule were thinking when they sought a better education outside their neighborhood. I wonder if the words of Louise Day Hicks are true.
This post is part of the 40/40/40 series.