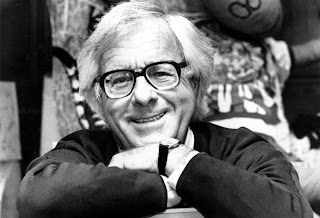 A few years ago, I had one of the most challenging groups of students and parents I had ever worked with in my entire teaching career. I must confess that Ray Bradbury helped me get through that difficult time because one of his stories in particular spoke to me and showed me I was not alone in what I was experiencing and feeling. I did a lot of soul searching that year about why I became a teacher, and if I even wanted to continue teaching. I thought a lot about expectations, especially what the "powers that be" expected me to expect from my students and from their parents. My decades of experience, and my National Board certification carried absolutely no weight. And, I found myself fighting against the dumbing down of quality teaching to make students and parents happy. Late one afternoon, as I scoured through old and new literature books, searching for the panacea to cure some of my students of their learned helplessness and entitlement, I literally stumbled across one of Ray Bradbury's gems "The Veldt". The minute I saw the name Bradbury, I knew the story had to be good. I also thought Bradbury's writing style might just help these students who resisted critical thinking connect to literature like no other piece they had ever read. Best of all, teaching "The Veldt" allowed me to express my civil disobedience of sorts by sending out the message loud and clear about our public school system's student, parent, teacher dynamic, that adults are often at the mercy of children's demands. "The Veldt" opened the eyes of some of the brightest students in my class, but as much as I hoped it would not, the story's true meaning went over the heads of my most rebellious students and their parents.

My students that year had been conditioned not to think and technology had been used to baby sit them, not to make them think. My high expectations and my attempts at getting them to think proved to be too much for them to handle because they were not used to being challenged. I realized their resistance to work was natural since no one had ever really expected much from them to begin with. Like Wendy and Peter, the children in the story, they had been used to doing what they wanted, when they wanted. And like Wendy and Peter, they naturally fought back when I threatened their status quo, imposed rules for the first time just like the parents in the story, or expected them to use their imaginations or critical thinking for the first time.

Reading "The Veldt" was like holding up a mirror for these kids and their parents, and yelling, "Hey, learn from George and Lydia’s mistakes! Stop enabling your kid to resist thinking and working in my class!" So it was natural, that the message fell on deaf ears. There was a small minority who did realize after our class discussions and activities, that the story was a social commentary about this type of dynamic between parents and children, and so much more. Their efforts to stay after class to converse and provide their own insights about the story proved to me they wanted to learn, and they knew what I was trying to tell the rest of them, but the rest of them interpreted the story at face value: children who think up the world of the veldt, a grassland in Africa so they can have their parents eaten alive by lions. What Bradbury wanted to convey through this ending was difficult for some students to swallow…pun intended, but in the end "The Veldt" fascinated all the students, making them think and wonder how someone had the nerve to write about children killing their parents. Akin to the children's character in the story, some questioned whether I had permission to allow them to read such a disturbing piece. (Luckily the selection was featured in the state’s approved text.) Unlike the parents in the story, I stood my ground, feeling successful at getting them to at least question why I wanted them to read this. And standing my ground, setting high standards, demanding that they learn and work, and produce original thoughts are what I realized students and their parents resisted the most. Like the children in "The Veldt", they threw tantrums whenever I asked them to think, and their parents, like George and Lydia, enabled the students to do the bare minimum, protecting them from ever experiencing failure, reaching their potential and expecting their children to earn As with little to no effort. If I refused to accommodate these needs, I risked unhappy parents and students.

For me, Bradbury's "The Veldt" poignantly captured my dilemma with these types of children and their parents, who as Bradbury characterized want to “do nothing but look, listen and smell…what else was there to do?” Shockingly for my class and for me, we learned Bradbury wrote and published the story in 1950. These behaviors, which I thought were part of a growing trend of insolence and indolence, I realized were not new, and were Bradbury's warning of future generations gone awry because of technology.

Although he wrote about the future, and described technological advances in prophetic detail, Bradbury criticized technology, i.e., television, cell phones, the internet, etc., and always warned us of the coming dystopia if we allow technology to replace our most human needs. My classroom that year was a glance into the future Bradbury warned about children, parents and technology. “The World the Children Made” as Bradbury originally titled “The Veldt” existed in my classroom. The children had in years past been allowed to make a world with rules convenient for them, allowed to use tech in ineffective ways, and there were plenty of adults who allowed them to enforce these rules.

But my students, like the children in the story were not blameworthy as Bradbury underscores in his story. In our public school system, as adults, sometimes, we try to protect children so much by expecting less from them. For a variety of reasons, students are often conditioned to do the bare minimum. We end up doing them more harm than good, stifling potential rather than encouraging it to develop. Like George and Wendy, the doting parents, we throw money at the problem, ignoring the root causes of the academic problems, as well as failing to educate parents about the importance of rigor and allowing students to learn from mistakes.

We all need to be more cognizant of academic expectations for children’s success in school and for later in life. Both teachers and parents need to constantly reflect on how we can most effectively implement technology at home and at school so adults do not lose children’s respect, and attention, and children do not lose their imagination and ability to think for themselves.

Bradbury's stories wanted us to think about all of these issues, our relationships with each other, and the price we pay in our relationships when we abuse technology. Technology can never replace the human bond we must make with our children. Technology, if abused, reduces us to a base state. The children in “The Veldt” lost their humanity and thought nothing of killing their own parents. Their parents’ attempt to provide the best life for their children backfired, and they failed to connect to their children.

Our attempts to make concepts easier for students to understand often backfires too, and we end up underestimating their true abilities and condition them to perform at standards below their true potential.

When it comes to technology, we must also be careful not to allow our desire to integrate technology to overshadow our need for rigor in our classrooms.

As much as I love technology, hence this blog, I know we must always maintain a balance between the analog and digital world and never ever ignore the human facets of teaching and learning. Some concepts are learned best without technology, and we can't ever lose sight of that.

The point of my entry is not only to write in memoriam of Ray Bradbury and express how much I loved his writing, but also to reflect on our expectations of students in the classroom, and our expectations of how we will use tech in the classroom to teach students how to think, not just play. If we don't, as Bradbury and the band deadmau5 who wrote a song based on the short story said, “this happy world of technology” we have designed for our children will end up consuming us and dehumanize them; if we make them "fall in love with the way they are", the children "will not ever want to leave", or try anything new but “looking, listening and smelling”, they will not want any authority figure unplugging them from their state of complacency.

Thanks Ray Bradbury for your bold imagination, for inspiring my civil disobedience and for teaching me to recognize when it's time to shut off the machine.

Comment by Martha Lackey on June 17, 2012 at 2:57pm
Looking forward to reading this book. As much as I love technology, I too see the negative side effects it can have on teenagers these days. I particularly see it with my own twin daughters who seem to be consumed with gadgets, social media and texting. I seem to be monitoring their social media activities more closely than ever these days and don' t hesitate for one minute that they could lose it all in a blink. It's a full time job, one that requires constant supervision. First time I have ever heard of this title. Thanks for sharing