This inscription is part of statue in Heroes' Square in Georgetown, Cayman Islands. The statue is dedicated to 24 women who led the charge for equal rights for women in 1948. 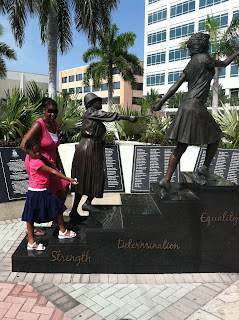 I spent last week with my five year old daughter and sister on a girls-only vacation without the interruptions of school, work, friends or family members. We were celebrating the closure of being a charter school family and gearing-up for our first endeavor into an arts-based summer camp in Harlem. Not a charge for equal rights but a recharge.

In a week designated for only sun, sand and water, there was constant learning occurring for my daughter's first venture out of the United States.

Her geography lessons included the size of the island: 41 square miles in comparison to the island of Manhattan. The bus rides allowed her to see the island and notice familiar restaurants and not so familiar food choices.

Her math lesson was understanding Cayman money and how it converts to US money. She was in charge of finding our gates at the airports and seats on the plane.

Her art lesson was taking photographs of the architecture of downtown Georgetown.

Her history lesson was making the connection between the numerous pirate statues and the island's history.

The trip to the turtle farm and watching the dolphin show exposed her to a variety of animals including a 555 pound turtle! A true science lesson.

Her civic lesson was the most important. She learned to play with other kids older and younger. She learned resilience and alienation being the only one who didn't know how to swim. She also learned that a best friend one day could swim away the next day.

Nothing planned. Nothing organized. Around-the-clock learning. 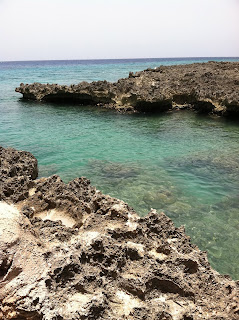 "Imagine what our neighborhoods would be like if, instead of
keeping our children isolated in classrooms for 12 years and
more, we engaged them in a community-building activities with
the same audacity with which the Civil Rights Movement engaged
them in desegregation 50 years ago. Just imagine how safe and lively
our streets would be if, as a natural and normal part of the curriculum
from K-12, school children were taking responsibility for maintaining
neighborhood streets, planting community gardens, recycling
waste, rehabbing houses, crating healthier school lunches,
visiting and doing errands for the elderly, organizing neighborhood
festivals, and painting public murals!" (p 158)
-The Next American Revolution: Sustainable Activism for the Twenty-First Century By Grace Lee Boggs with Scott Kurashige

This post is part of the Those Who Can series.