I wish there were words to describe the look on everybody’s faces today (including mine!) during the in-class activities of our first flipped classroom lesson (you can see here how it all started!)! If the word satisfaction had a picture right next to it in the dictionary, then, that would definitely be one of my learners’ and my expression after our English lesson today! And, although I know that statements of this kind are not academically acceptable or customary, please, dear colleagues, allow me to share my enthusiasm with you as I have been feeling it since a quarter past one today!

Yes, it was the last teaching session of the day and, yes, it had to be with the 6th graders! Yes, they had all watched the videos and, yes, they had all tried the recommended interactive tasks included at their school blog post (or at least they said they had!). Yes, we started working in three teams and, yes, none of us knew at the time how the pre-designed in-class activities would work either individually, or in terms of groups!

After separating the learners in three groups and promising to award the one that will demonstrate the most exceptional team work, we started with the first task that involved learners in grouping the adjectives based on the way they form their comparative and superlative degree. This task seemed to be an appropriate warm-up and an initial opportunity for the teacher to monitor and evaluate the level of comprehension of the new grammatical structure the learners had learnt about through the videos they watched at home! The specific task appeared to be easy for everyone, we checked the answers and moved straight to sentence-making in the second task! In approximately five to six minutes, learners managed to complete this task, involving everyone in the group and negotiating the correct sentences in an admirably cooperative manner! After that, task three and underlining the comparative and superlative forms of adjectives seemed like a treat, especially for those who normally show unwillingness or hesitation to participate while checking the correct answers! Everybody seems to be clear on how to form the degrees of adjectives and everyone appears to be capable of making sentences using them meaningfully. And, when I say everyone, I really mean everyone!

Later on, it was games time! Task four and “Plip” and “Plop” sentences really took everybody off to the level of learning while having fun! Groups agreed on the sentences they would say and the fun began right after that, trying to find out what “Plip” and “Plop” were! Finally, “The Broken Sentences” game will be the task we will all remember for a long, long time! As we were moving towards the end of the lesson and there had to be some time left for homework assignment (and explanation!), I gave them a challenge, saying that the fastest team to get the sentences right would earn extra points for the best team work award! The level of engagement, the constant reminding among group members of the grammatical rules to be followed, the unprecedented level of cooperation, support and encouragement are, unfortunately, for us to know and appreciate and you to imagine!

THE FLIPPED CLASSROOM - LESSON 1 - DEGREES OF ADJECTIVES from viv_h

So, was the inverted lesson a big success? No, it was huge, I’d say, and learners commented so possitively on that as soon as the bell rang and they started packing their things for home! They all participated, they all got involved, they all raised their hands to contribute, they all appreciated the work of their team members and, what is more, they all stated that they did not realize that time went by so quickly and that they want a flipped lesson again some time soon! As for the teacher, she was only restrained to monitoring and coordinating groups, while evaluating the level of perception of the new grammar by the learners (given that the materials had already been designed, photocopied and cut for the tasks and games!)! Although it seemed very easy and discrete to intervene and help a learner in need, that was at no point necessary, as team members would step up and support their peers.

It is worth noting, however, that the particular class had also been taught the degrees of adjectives in the 5th grade and most of them have had a lot of practice in them in their afternoon English lessons in private language schools, so they were quite comfortable with the form and use. This allowed us to move from task to task relatively quickly and the time/award challenge seems to have ‘spiced’ a lot the procedure! Had the video lessons been confusing or incomprehensible for some learners, the pre-designed in-class activities would more likely last for at least two teaching sessions. 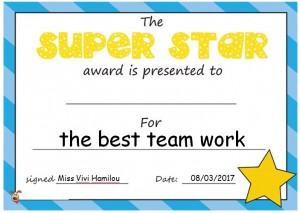 Award for the best team work!

All in all, my learners and I cannot wait for the next flipped lesson, as it was a unique learning and teaching experience! A million thanks to Ms Andriani Rigoutsou for doing all this hard, time-consuming and demanding work that had always been dragging me away from trying the flipped classroom (meaning collecting the videos and online interactive games, as well as designing and preparing the in-class activities/worksheets), but, most of all, thank you for inspiring us and making us part of a a very supportive and cooperative group of colleagues and classes that share with us the same concerns and interests in new teaching approaches!

That was only a two-times thing actually and the hard work of materials preparation (videos, interactive games for homework and in-classroom activities) had been completed by a Greek colleague who meant to try them but couldn't at the time! I definitely intend to work hard and prepare more lessons of this kind! My learners loved it and I enjoyed it equally! They keep asking for more, really, so I am doing it again soon! To answer your question, none of me colleagues at school has ever done or is doing it!

I noticed that you are conducting Flip Classroom teaching style. I was wondering was it difficult to set up and are you the only teacher in your school that is doing it?