A google spreadsheet was sent via e-mail from our Superintendent, explaining that our next upcoming Professional Development Day was going to be run in the "unconference" style. I was thrilled. Finally a professional development day filled with choice and interest! This approach invited teachers and staff to sign up for a time slot to present an idea, talent or skill which they thought would be interesting to share with their colleagues in the district. I could actually learn something…
Continue

Should Teachers include Peace Education Goals?

This is a post which has been brewing for some time now and I have taken the opportunity to publish it on this day of September to celebrate the International Day of Peace.…

iPad Apps Party in Second Life (ISTE) ... Followed by a 24/7 Exhibition on isi 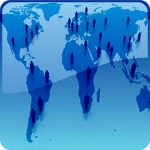 Getting it right this time with Google Docs.

We had just finished a series of lessons on the Renaissance in my AP European History class when it became clear that a massive review was needed to cement their understanding of this time period. Learning from a missed opportunity with my AP World History Class we used Google
Documents in a Wiki like fashion to create a study guide for their assessment.…

Don't let others define who you are!

On Twitter tonight there has been a lot of chatter about Oprah and “Waiting for Superman” To be honest I didn’t listen to Oprah nor would I let her define who I am. I know who I am. Do you want to know who I am; I… Continue

Backchannel Chatter in the Classroom

Backchannel chatter is the use of any type of texting communication by students while a lesson and/or discussion is in progress.
Previously, this texting was frowned upon by educators and looked upon
as a distraction. After all, students are expected to be respectful and
pay attention to the discussion, each other, and, above all, the
teacher, right?

In previous classes, I experimented with allowing the students to use Google chat. It was an…

I hope you realize you have the best job...

The last 4 weeks have been extremely busy for me. We recently started a brand new gradebook and website system in my school district. This has proven to be an amazing tool and
resource as we look to ways to improve education. For all the greatness
this new opportunity provides, we have been faced with the never ending
battle of growing and developing educators so they can utilize this new
resource. As exciting as it is to work with educators…
Continue

I've been keeping a website with the free Internet resources I've been collecting while teaching ESOL.
https://sites.google.com/site/englishasanewlanguage/
Hope it helps!

Recently, I read an essay in…

Today I begin my first class of instructional…

Building relationships is all that matters...10 effective strategies 1 - Listen to what others are saying...
Being able to speak is important...being able to listen is more important. If you can truly listen to what others are saying, you will
be able to establish an unlimited amount of strong and long lasting
relationships. Your ability or inability to listen, will most
definitely affect the success, and the number of relationships you will
have in life.

5 ways to share how you light the world on fire... Last week I was speaking with a colleague of mine, and we were discussing activities we could do during one of our professional
development days. As we discussed potential ideas, we turned our focus
to activities that teachers could employ immediately. We wanted to
avoid activities that would require a lot of time and preparation in an
effort to provide our teachers with several very strong and powerful
strategies they could… Continue

Missed an opportunity to use Google Docs…Daggumit

A journey of a thousand miles must begin with a single step.
Lao-tzu, Chinese philosopher

How do "Twitter Chats" add to your PLN?
Recently there has been a growth in the use of weekly "Twitter Chats" ... these are usually one hour sessions at a fixed time each week on a theme decided using a poll ... and it all runs on Twitter.
The key feature is that all posts during an individual discussion should include a specific hashtag.
For specific details visit…
Continue

Education - a tool to deliver social policy or a way to control the masses?

It's now 23 years that I've been in education. In that time we've had a Conservative Government, a Labour Government and now a Coalition Government.

Education has moved forward and I firmly believe that kids get a better deal with better teachers now than then although the teacher I worked under on teaching practice proves that there were outstanding teachers back in 1986!

It all starts with you... On any given day, educators experience the highest of highs and the lowest of lows. How an educator reacts and responds to these highs and
lows can often dictate the overall mood of the day. In my short 6 years
as an educator, I have learned several things as it pertains to
remaining positive, as well as keeping things in perspective when it
comes to my professional and personal life. Educators have an extremely
difficult and… Continue